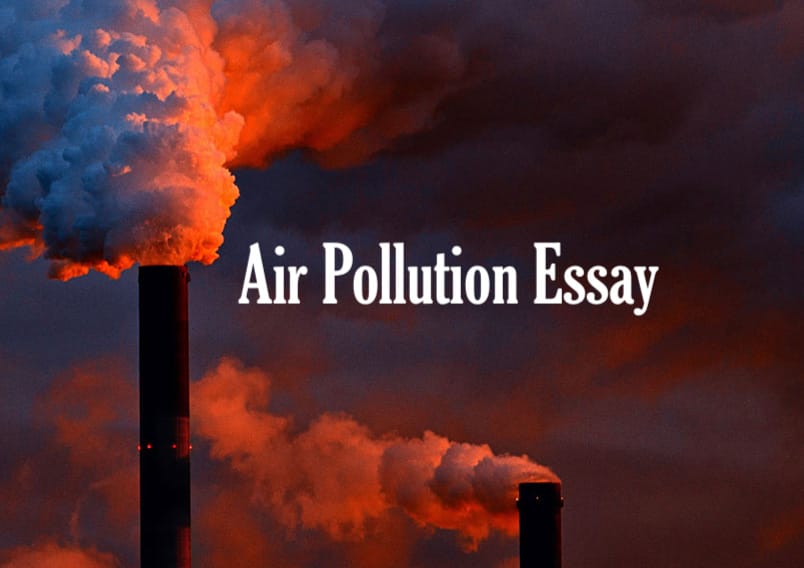 Nowadays, air pollution in our country has become a bane of our existence. It is not only a problem in our country but the countries all over the world are affected by it. The effects of air pollution are felt especially in the metropolitan cities because of the growing levels of industrialization. The discharge of air pollutants such as concentrates, smog, solid materials etc are settling over the cities. Excess amount of machinery, use of harmful gases, and use of methane are causing the air pollution. The population’s heavy production of waste is the main reason that the air pollution is increasing rapidly.

Air pollution has become a big problem these days. It has caused a lot of damage to the mankind, wildlife and personal property. It has affected the lives of humans and animals, causing a lot of health disorders. It is become one of the biggest reasons for the reduction in the quality of life. The reason, its increasing so rapidly is because of the increase in the number of industries. Air pollution causes fog, smog and introduces a lot of harmful gases in the environment that has greatly affected the humans with diseases like asthma, bronchitis and many lung diseases. The pollution emitted from one industry does not stay at one place and spreads rapidly and affects the atmosphere and the species very much.

Air pollution is constantly damaging the whole biological system. It has reached a stage where its affecting the earth as the harmful radiations are able to reach deep into our atmosphere and cause a lot of damage.

Air pollution is one of the many reasons for environmental degradation these days. There are many things that contribute to the rapid increase of air pollution these days. Automobiles, industries, burning of fossil fuel, emitting of pollution from vehicles like cars, jeeps, trucks cause immense amount of pollution. Air pollution happens when harmful gases, dust and smoke enters the atmosphere making it tough for the plants, animals and humans to survive as the air turns dirty.

Environmental pollution occurs when pollutants contaminate the natural surroundings. Air pollution hugely affects the balance of our ecosystem, upsets our normal lifestyle and gives rise to global warming and human illness. It has increased due to the increase in industrialization, development and modernization in our society.

Industries release harmful gases and particles. Paints and batteries contain lead. Transportation releases gases like carbon dioxide and burning of substance releases carbon monoxide and many other harmful gases that cause great deal of damage to the environment.

Our daily activity that causes release of dangerous gases to release makes the atmosphere dirtier every day. It leads to the climate change negatively and at a faster rate. There is a growing need to curb the increasing rate of air pollution if we want to live in a natural environment.

Pollution is a common term we use very commonly. There are mainly three types of pollution: air pollution, water pollution and soil pollution. Air pollution is the most damaging of all. By air pollution, we mean, the contamination of the air, not withstanding whether it is indoors or outdoors. Due to the increasing pollution, it has started affecting the ozone layer, which has started to cause a lot of trouble to the environment.

It is very important that we realise the fact that our earth requires that curb the carbon emission by censoring a lot of the industrial activities. We also need to cut down the cars on the road that use diesel as it is very harmful for the environment. The use of harmful chemicals also needs to be checked as they destroy the environment at a faster level than anything. We need to step up to our duties and start taking our responsibilities towards our environment seriously.

As the fresh and natural air gets dirty and polluted by the means of smoke, dust, toxic gases, the motor vehicles and industries, that’s called air pollution. Air is one of the most important elements in life. Some of the main reasons for the environment to get this dirty is the use of motor vehicles such as cars, motorcycles, buses, trucks, jeeps, trains and aeroplanes. These vehicles use a lot of fuels which emit a lot of carbon dioxide in the atmosphere and that is the biggest reason for the air getting dirty.

Carbon dioxide, these days, is solely responsible for 57% of the global warming that’s taken place till now. Chlorofluorocarbons (CFC’s) that are most commonly known for being used in refrigerators are responsible for lowering the concentration of ozone in the stratosphere. CFC’s are also heavily in aerosol cans. They were banned in the United States, Canada and most of the Scandinavian countries because of its harmful properties and its capabilities of harming the environment. Aerosols are still used around the world on a regular basis and account for 25% of the global CFC use. The thing with chlorofluorocarbons is that it moves slowly and takes years to move to the stratosphere. This is the biggest reason for the breakdown of the ozone layer. Chlorofluorocarbons are a green house gas that contributes a lot to the depletion of the atmosphere and the environment.

Smog is biggest outcome of extreme air pollution. It is the contraction of the words fog and smoke. It has been caused by smoke particles being condensed by water, which usually happens while burning coal. With the replacement of coal with petroleum in countries, pharmaceutical smog has become very common in many big cites.

There is a growing need to combat this growing problem that is slowly running our lives as well as our environment. We need to take care of this before it gets worse.

The World Health Organisation defines air pollution as “the presence of materials in the air in such concentration which are harmful to man and his environment”. In fact, air pollution is the occurrence or addition of harmful particles, gases and other pollutants into the air which have an adverse effect on human beings, animals, vegetation, etc.

Sulfur dioxide emitted from the combustion of fossil fuels like coal, petroleum and other factory combustibles are one the major cause of air pollution. Pollution emitting from vehicles cause an immense amount of pollution. We depend on vehicles of fulfilling our basic need of transportation. But, their overuse is killed our environment as dangerous gases are produced from vehicles.

Ammonia is a very common product from agricultural related activities and is one of the most hazardous gases in the atmosphere. They emit harmful chemicals into the air and can also cause water pollution. Manufacturing industries release large amount of carbon monoxide, hydrocarbons, organic compounds and chemicals into the air thereby depleting the quality of air.

Mining is a process wherein minerals below the earth are extracted using large equipment. During this process dust and chemicals are released in the air causing massive air pollution. Household cleaning products, painting supplies emit toxic chemicals in the air.


Air pollution causes diseases like Asthma, severe heart conditions along with cancer, among other threats to the body.

Another direct effect is the immediate alternations that the world is witnessing due to global warming.

Harmful gases released into the atmosphere during the burning of fossil fuels. When it rains, the water droplets combine with these gases, become acidic and it can cause damage to human, animals & crops.

The ozone layer is depleting due to the presence of CFC’s & HCFC’s in the atmosphere. As the ozone layer will go thin and it will emit harmful rays back on earth and can cause skin and eye related problems. It can also affect crops.

Just like humans, animals also face some devastating effects of air pollution. The toxic pollutants deposit over the surface of the water and also affect sea animals.

Essay on Health is Wealth

Essay on Corruption in India

Essay on My School