PTE Summarize Written Text Examples – Read the passage below and summarize it using one sentence (around 50-60 words). Type your response in the box at the bottom. You have 10 minutes to finish this task. 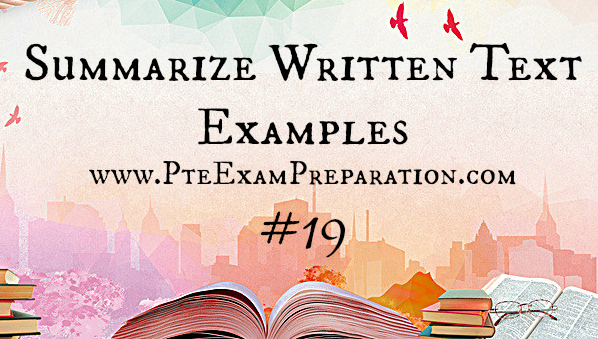 The idea of parallel universes once consigned to science fiction, is now becoming responsible among scientists – at least, among physicists, who have a tendency to push ideas to the limits of what is conceivable. In fact, there are almost too many other potential universes. Physicists have proposed several candidate forms of “multiverse”, each made possible by a different aspect of the laws of physics.

The trouble is, virtually by definition we probably cannot ever visit these other universes to confirm that they exist. So the question is, can we devise other ways to test for the existence of entire universes that we cannot see or touch? In at least some of these alternative universes, it has been suggested, we have doppelgangers living lives much like – perhaps almost identical too – our own.

That idea tickles our ego and awakens our fantasies, which is doubtless why the multiverse theories, however far-out they seem, enjoy so much popularity. We have embraced alternative universes in works of fiction ranging from Philip K Dick’s The Man in the High Castle to movies like Sliding Doors.

Indeed, there is nothing new about the idea of a multiverse, as a philosopher of religion. Mary-Jane Rubenstein explains in her 2014 book Worlds Without End. In the mid-16th century, Copernicus argued that the Earth is not the centre of the Universe. Several decades later, Galileo’s telescope showed him stars beyond measure: a glimpse of the vastness of the cosmos.

So at the end of the 16th century, the Italian philosopher Giordano Bruno speculated that the Universe might be infinite, populated by an infinite number of inhabited worlds.

The passage draws our attention to the question of the existence of multiverses, and further states that there is currently no way to test this idea, though in the past several writers, philosophers and scientists, have hinted at the same.

The decline in autumn rainfall in south-east Australia has strong qualitative similarities with the decline observed in the 1970s in Perth (Murphy & Timbal 2008). Unlike south-west Western Australia, however, the south-east of Australia is affected by several climate systems including the El Niño – Southern Oscillation and the Southern Annular Mode. There is currently no consensus on the magnitude of the influence of these systems, or on how they will respond to global warming (Murphy & Timbal 2008; Timbal & Murphy 2007; Cai & Cowan 2008a; Hendon et al. 2007). One estimate is that the El Niño – Southern Oscillation and the Southern Annular Mode each account for around 15 per cent of the observed rainfall variability in south-west Australia during winter and in southeast Australia during winter, spring and summer (Hendon et al. 2007). It has recently been suggested that increased temperature has a large impact on streamflow. After accounting for interdependencies, such as the effect of rainfall and clouds on minimum temperatures, Cai and Cowan (2008b) conclude that a 1o C increase in maximum temperature results in a 15 per cent decrease in streamflow in the Murray-Darling Basin.