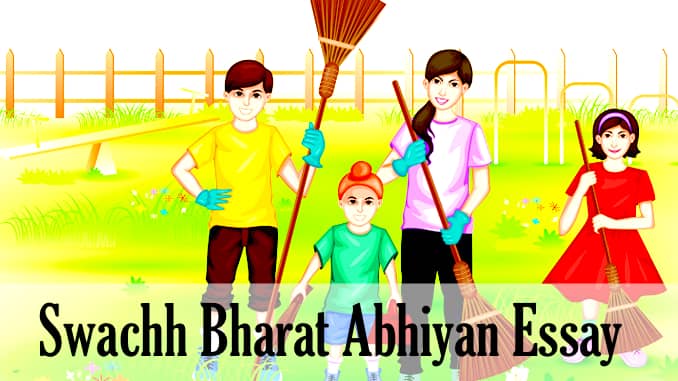 One the day of the launch of this campaign, the Prime Minister announced the names of 12 celebrities and asked them to motivate the cleanliness campaign in their area and motivate the public to join them. Which includes Sachin Tendulkar, Priyanka Chopra, Amitabh Bachchan, Virat Kohli etc.

The main objective of this campaign is to eliminate the defecation in the open by creating toilets in both rural and urban areas, because of this, due to the spread of filth and infectious diseases. The purpose of this campaign is to make citizens aware about cleanliness and motivate them to clean up, to clean the streets and roads, to promote cleanliness programs in rural areas etc.

For the progress of India, the people of India need to be healthy and good health will only happen when there is cleanliness. Cleanliness should be a part of a habit and routine. There is a need to take big steps for this major change. This campaign should not only be given the name of a government campaign. It should be like a campaign for us. We have to understand our responsibility towards cleanliness. And when we will succeed in doing this, the dream of Mahatma Gandhi’s clean India will be fulfilled that day.

“Sanitation is more important than independence” these words of Gandhiji laid down the foundation of Swachh Bharat Abhiyan.

Narendra Modi the Prime Minister of India launched this nationwide campaign that aims to clean up the country in the next five year. He believes that Gandhiji not only fought for independence but also for the clean country.

The campaign aims to clean towns, roads, streets and infrastructure of the country. The campaign was launched by Prime Minister himself by cleaning the roads in Delhi. Its inaugural proved of the biggest invest, cleaning various localities. He asked all citizens including, celebrities, sports legends and business tycoons to join the campaign.

He asked people to share their contribution to social media. Modi had invited some of the important personality like Priyanka Chopra, Salman Khan, Anil, Ambani, Kamal Hassan, Baba Ramdev, Sachin Tendulkar and Mridula Sinha. He asked every Indian to spend 100 hours annually in this drive. He has also urged to build toilets for proper sanitation. Modi believes that other nations are clean not because of an efficient clean drive but because of the joint efforts of citizens too. The citizens over there are aware of their responsibilities thus avoid littering.

Eminent people have come out themselves shouldering the responsibility. Modi aims to fulfil the dreams of clean India by 2019, the 150th Birth anniversary of Gandhiji. To check the progress of the campaign, Modi himself made surprise visits to various offices. His team of ministers too has contributed by talking up the taste of cleaning. Students of Delhi University have decided to study the impact of this campaign thus by suggesting scope for improvement. After completion of 5 years, they will submit the document including success rate, problems and various other studies and findings related to the campaign.

Clean India can boost International tourism thereby adding to countries growth. The campaign just started, for its success every citizen has to put in efforts. Only then our nation can become world class countries like European countries. No matter how successful our economy booms, if the country is not clean at the ground level, the mark of being a developed nation will not yield a result. If Indians can reach mass with minimum expenses they can even clean their nation.