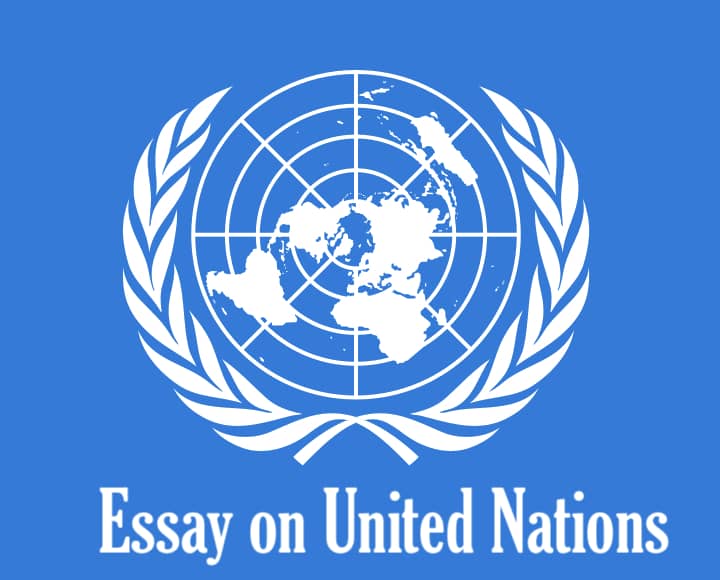 The League of Nations founded in 1920, on the initiative of Woodrow Wilson, the President of the US, could not avert the Second World War (1939-1945). A serious effort was, therefore, made by some nations to replace it. On 26th June 1945, the representatives of fifty countries met in San Francisco and signed the Charter of the United Nations. Officially the world organisation came into being on 24th October 1945. This day is celebrated every year as the UN Day. It now has 185 members. Its headquarters is in New York.

The UN Charter is a noble document. It is the great Magna Carta of mankind. The aim of the UN according to its charter “is to save succeeding generations from the scourge of war, to reaffirm faith in fundamental human rights, to practice tolerance, to live together in peace with one another as good neighbours, to maintain international peace and security and to employ international machinery for the promotion of the economic and social advancement of the peoples”.

There are several organs through which the UN functions, the most important being the General Assembly and the Security Council. The General Assembly is almost like a World Parliament. It is the deliberative organ of the UN, where each member-nation has one vote. The Assembly holds its regular session every year, from mid-September to mid-December. The primary responsibility for maintaining peace and security rests with the Security Council. The Council has fifteen members, of which China, France, Russia, the United Kingdom and the United States of America are permanent members. The other ten members are elected by the General Assembly for a two year term by a two thirds-majority. No decision can be taken by the Security Council unless each and every one of the permanent members agree to it.

The UN has not greatly succeeded in maintaining peace in the world. We cannot forget the service rendered by the UN to put an end to the war in Korea and Congo. It paved the way for driving out Iraq from Kuwait. However, it failed miserably in stopping the war in Vietnam and the aggression started by Israel upon the PLO. No effective steps were taken when Russia sent its army to Afghanistan, when the UK took military action in Falklands, when war broke out between Iran and Iraq and when South Africa entered Angola and attacked its army. No timely action was taken to check the terrible genocide in Rwanda and the civil war in Yemen.

The real achievement of the UN lies in its many agencies. The UN Office of the High Commission for refugees has helped to place some twenty-five million stateless people. For this, it was awarded the Noble Prize for Peace in 1954 and 1981. The WHO has eradicated smallpox from this planet and has considerably reduced ‘malaria in many tropical countries. The UNICEF and the WHO have revolutionised child health care in developing countries. The Integrated Child Development Services (ICDS) has succeeded in reducing the deaths of children from diarrhoea and childhood diseases. We are reminded of the triple antigen, the Salk Vaccine for polio and oral rehydration therapy (ORT). There are several agencies that render very good service to the member nations.

The efforts of the UN at establishing peace can be made effective if it has a permanent army and the power of veto given to the permanent members of the Security Council is done away with. But these members do like to part with this power. The US objects to form a permanent army.

In spite of all its shortcomings, the UN is the only hope for mankind. Every year the delegates representing the member-nations meet and exchange ideas in the General Assembly. This helps to create detente. The existence of the UN is indispensable to a world beset with wars, mutual hatred, conflicting political ideologies, religious fundamentalism, terrorism, and relentless subjugation of the fundamental human rights, population explosion and lust for political power.

Note – Now you can also send United Nation essay in English through comment box. You need to write an essay on United Nations Organisation in our own words.