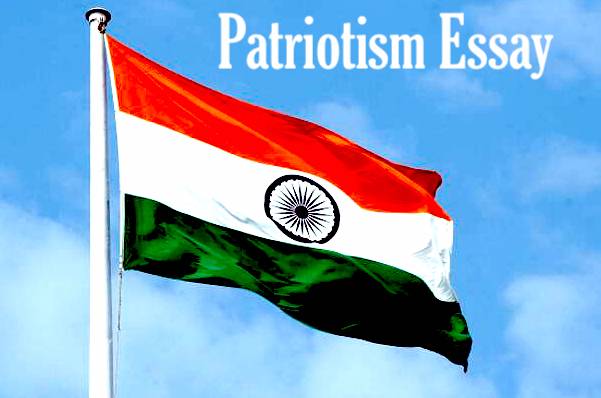 Essay on Patriotism in English

Patriotism can be defined as the quality of being patriotic and a patriotic is someone who has love, devotion and loyalty for his country and vigorous support for their homeland. Patriots are known for their unconditional love for their country and feel proud to be its citizens. They have a sense of alliance with other citizens, which can be on the basis of the same values or many other aspects which can be cultural, political or historical, related to one’s own homeland.

A Patriotic person is always on the side of his own nation and supports its leaders if they are deserving. They are devoted to their own country, have concern for its defence, keeps the interest of their country as their priority and always desire for its prosperity, growth and development. They have an emotional attachment to their nation and this attachment is also known as national feeling or national pride.

Patriotism is closely related to the set of concepts found in nationalism and are sometimes even used interchangeably. But the main difference between both of these concepts is that the patriot feels proud of his country for what it does but a nationalist feels proud of his country no matter what it does. So patriotism creates a feeling of responsibility while the nationalism creates a feeling of blind arrogance that can even lead to wars.

Although, many people think that patriotism is related to laying one’s life for his country but it is actually far more than that. It means serving the country in every possible way, working for its battlement and willingness to sacrifice own life whenever needed.

Having patriotism is actually very important for the freedom of the country and our freedom fighters are the biggest example of that. A patriot even if he has laid down his life for the sake of their country, actually become immortal. They are worshipped by their countrymen and are honoured all over the world as they have suffered great hardships for their country and even sacrificed everything for the freedom of it. They earn an immortal name through self-sacrifice. Thus many patriots even after losing many things including their lives win the hearts of their countrymen.

In the past, particularly during the British rule over India, many people served our country and even laid their lives for it and still, there are many such people who continue to serve their country with as much devotion and are ready to lay down their lives for protecting their homeland from intruders and invaders. Indian freedom fighters were filled with the feeling of patriotism and they never cared about their lives and worked selflessly for the nation. Even today, many people are serving our nation with full dedication in whatever way they can. However, the spirit of patriotism is gradually fading these days as the youth of today does not feel as strongly for their country as people of the early generations felt.

The parents, as well as teachers, must make an effort to instil the spirit of patriotism in the coming generations. They must promote emotion of patriotism as the youth of the country must respect the country, feels attached to it, makes efforts and work towards making it a strong nation.

Many educational organisations arrange programs, activities and events but only on 15th August and 26th January. Around this time, the feeling of patriotism seems to engulf the entire nation. But actually, this is not real patriotism. Such an atmosphere must be created not just around these special dates but in general too. Only then such emotions will be instilled in the heart of every citizen perpetually. A nation where the youth lovers the country and is driven towards improving its condition economically and socially would certainly have a better chance to grow and develop.

Our flag is not just a piece of cloth with colours on it but it is a symbol of liberty, freedom, sacrifice and is marked by the blood of those who have died defending it. When a person realises this, only then he or she can become a true patriot and can inspire others around him to work towards building a strong, better and a successful nation.