GST Essay or Essay on GST in English

Essay Topics – (GST Essay or Essay on GST) Read GST essay in English in 300 and 500 words. Let us know if your essay on GST in pdf. We will send pdf which will help you in UPSC exams. Essay on GST in India is the most asked question in 2019. People know less about GST which make examiner include this question. 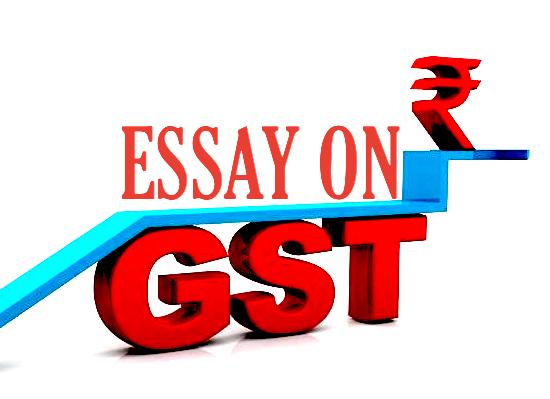 Goods and services tax GST is a comprehensive, multistage destination based indirect tax that is levied on every value addition. The objective of GST is to subsume most indirect taxes like a value-added tax (VAT), service tax, excise duty, customs duty, entertainment tax etc and establish a concept of one Nation one tax. President Pranab Mukherjee and Prime Minister Narendra Modi launches this tax plan on July 1st 2017 which came into effect through the implementation of 101 Amendment Act of the constitution of India.

GST Council having 33 members in the governing body of GST which is chaired by Union Finance Minister. GST is levied at every step in the production process but is refunded to all parties in the chain of production other than the final consumer.

Some major advantages of GST are reducing the complication in tax administration, removal of cascading of taxes levied by central and state governments, improve competitiveness for the trade, cost of doing business will be low, relief in overall tax burden for consumers and help to build a transparent corruption free tax administration.

GST (India’s biggest tax Reform) is a Revolutionary step taken by the government of India to ameliorate the economy of the nation. According to the latest report introduction of GST would help India to gain 15 billion dollars every year. In this way, GST proves to be a game changer and is beneficial not only to the people but to the country as a whole.

The goods and service tax (GST) is one of the biggest economic and taxation reforms undertaken in India. Good and Services Tax (GST) is an indirect tax applicable though-out India which replaced multiple cascading taxes levied by central and state government. It was introduced as the Constitution Act 2017. The GST is governed by GST council and its chairmen are the Finance minister of India. GST simplifies taxation procedure and it applied to both Goods and services. Taxes like excise duty, service tax, VAT, luxury tax etc. will go with GST’s implementation. Under GST goods and services are taxed at following rated 0%, 5%, 12%, 18% and 28%.

GST is essentially a consumption tax and is levied at final consumption point. The principle used in GST taxation is the destination principle. It is levied on value addition and provides set-offs. As a result, it avoids cascading effect or tax on tax which increases the tax burden on the end consumer. It is collected on Goods and services at each point of sale in suppler line. Since it reduces cascading effect it would be more transparent. In the GST system, when all the taxes are integrated it would make passive the taxation burden to split equitably between manufacturing services. There is no doubt that in production and distribution of good and services are increasingly used or consumed and vice-versa.

GST will be levied only at the final destination of consumption based on VAT principle and not at various points. This will help in removing economic distortion and bring about the development of the common national market. GST would benefit people as prices will come down which will intern help companies as consumption will increase.

However, according to some economist, GST in India would have a negative impact on the real estate market. It would add up to 8% to the cost of new homes and reduce demand by 12%. Some experts say that CGST (Central Goods and Services Tax), SGST (State GST) are nothing but new names for central excise or services tax, VAT and CST. Hence there would be no major reduction in a number of tax layers. Some retail products previous had only 4% tax on them. After GST some of the retail product prices have been increased.

There is no doubt that GST aimed at increasing the taxpayer base by bringing SMEs and the unorganised sector under it. This would make the Indian market more competitive than before and create a level playing field between large and small enterprises. Further, Indian business will able to better compete with foreign countries such as China, Philippines and Bangladesh. However, some experts have also identified some of the disadvantages of GST implementation which could be a cause of worry for some industries.

Note – Write your GST essay in India or Essay on GST in English for 300 words. If you are preparing for UPSC exam it will help you there as well.