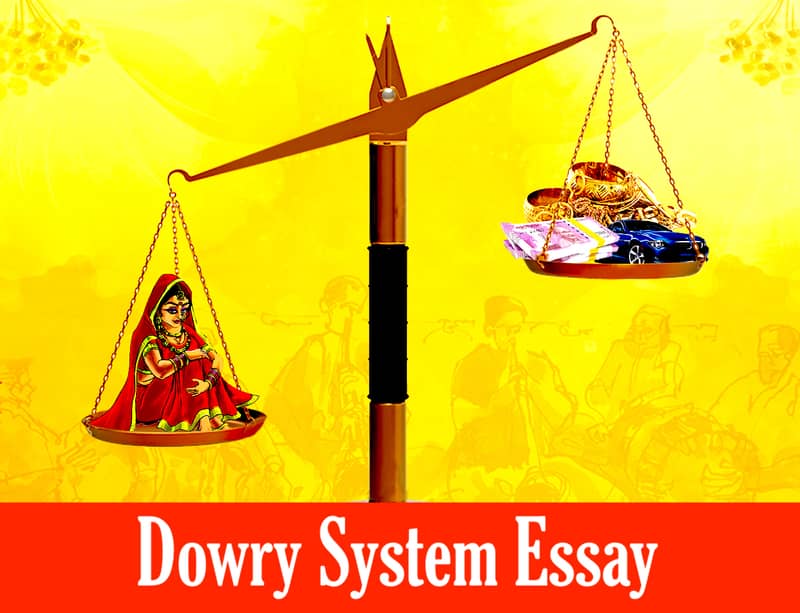 “Any young man, who makes dowry a condition to marriage, discredits his education and his country and dishonours womanhood” – Mahatma Gandhi.

In India, there is a practice to give presents to the girl at the time of her marriage. Their marriage gifts are known as dowry. The parents of the girl velds her materially at the time of going to her bridegroom’s house.

In the present time dowry has become a curse sometimes it becomes difficult to quench the thirst of girl’s father-in-law. He forces more and more the girl’s parents to give something or the other. If his greed is not satisfied, the girl is tortured. In such a condition often a newly married girl of a poor family commits suicide. Parents give dowry to help their daughter for starting a new life and as a token of love.

Married women suffer much. Sometimes a young bride dies in a store explosion and sometimes found hanging from a ceiling fan. This happens when a lady does not bring enough money from her parents. “The need of a person can be satisfied but not the greed”.

The government has also passed a law making dowry a punishable offence however it is still being practised in most parts of the country causing agony for the girls and their families. Demanding checked if public opinion is formed against it. This can not be checked without the support of the public.

The abolition of dowry is the need of today. Young boys should realise that they are not commodities to be sold. Young girls should refuse to marry young boys whose parents are greedy. Without determination, the evil can not disappear.

The existence of systems is probably only since human civilization has evolved, there are many types of systems prevailing in the whole world. Systems or Practices, which were made for human society. But sometimes these systems subdue humans, The perception of the tradition falls on their thinking and understanding, and if somebody removes the curtain and conveyed the truth to the people, then some people suppress that “transformative thinking”.

One such system the “dowry system”. After the marriage, the gifts, household items, rupees and ornaments, and any kind of movable and immovable property brought with her by the daughter-in-law are called dowry.
Dowry-system was started as blessings to give a start to a new home of daughter after marriage. But due to the time, some greedy tendencies people have changed the real meaning of this system. Now “dowry system” has become a very important part of marriage. Dowry system is not only prevail in India but also in Europe, Africa, China, Greece, Japan and more other countries. In different countries, the type and purpose of dowry have remained very different, but now many countries have stopped the circulation of this practice, but this practice in India has still been formidable form.

Many people pretend not to take dowry, At first the groom-side people say that “we only need your daughter” And then there are later dialogues “There should be at least one gold chain, ring and 51 thousand cash in the “Teeka” (a kind of ritual before marriage), otherwise what will be our respect in the relatives?” After that, before marriage “daughter should have her ornaments in full with her, and then whatever you wish, give her, taking care of caste and society.” The Excuse is to keep honour in the caste and society and means the solution is itself. If the boy is a doctor or engineer then the demand for dowry increases even more because the boy is very educated.

Many laws have been made to eradicate the dowry system and over time the law has been made more rigid. But still, daughters could not escape. Many dowry grievances cannot reach the law and daughters commit sins like suicide. Laws related to Dowry system are following - • According to the Dowry Prohibition Act, 1961, there is a provision for the imprisonment of 5 years and fine of 15,000 rupees for taking dowry, giving or cooperating in its transactions. For harassment of dowry, under section 498-A of the Indian Penal Code which is related to the case of illegal demand for property or valuables by husbands and their relatives, there can be 3 years of imprisonment and fine.

Whether it is a parent or a sibling, everyone thinks that their sister-daughter is always happy and safe, but does not anyone else’s daughter or sister should possess this pleasure and security? Giving away the daughter to such dowry-greedy people by ourselves is like we pushed our daughters in the wells of plight and sorrow. We all have to oppose this system together. Dowry will neither give nor take.