Summarize Written Text Questions Practice Test 25 – Read the passage and summarise it in one sentence in not more than 75 words. Type your response in the comment section at the bottom of the screen. You will have 10 minutes to finish each passage. 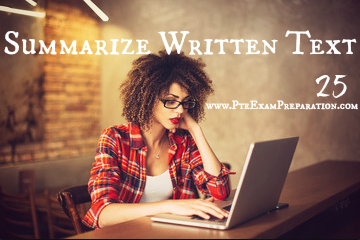 Orville and Wilbur Wright were brothers living in Dayton, Ohio. The two had started making bicycles during the 1890s and had a successful small business selling their Wright Specials for $18 each ($475 in today’s green). This experience with building light, strong machines would prove valuable in the coming years after the brothers’ interest turned to flight.

Others in the United States were also developing aircraft at the time the Wright brothers started turning their curiosity skyward. Samuel Langley had flown an unmanned steam-powered aircraft in 1896. Octave Chanute and others were flying gliders near Chicago late in the decade as well. But it wasn’t until the Wright brothers started working on the matter that the “flying problem” would finally be solved.

Although other people were equally curious in developing aircrafts it was the Wright brothers who first solved the flying problem by designing and building a series of gliders to test their various ideas on a flying machine.