Summarize Written Text Online Test – Read the passages below and summarise them using one sentence in not more than 75 words. Type your response in the comment section at the bottom of the screen. You will have 10 minutes to finish each passage. Practice summarize written text online and write the summary in the comment box below. 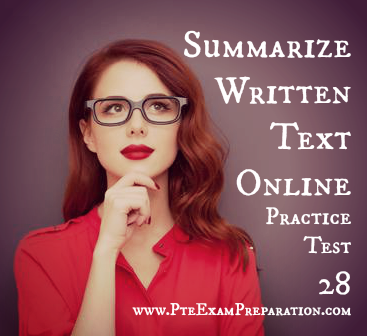 We see stars all around, so why doesn’t their combined light add up to make our night sky–and surrounding space, for that matter–bright? German physicist Heinrich Wilhelm Olbers put the same puzzle this way in 1823: If the universe is infinite in size, and stars (or galaxies) are distributed throughout this infinite universe, then we are certain to eventually see a star in any direction we look. As a result, the night sky should be aglow. Why isn’t it?

In fact, the answer is far more profound than it appears. There have been many attempts at explaining this puzzle, dubbed Olbers’ Paradox, over the years. One version implicated dust between stars and perhaps between galaxies. The idea was that the dust would block the light from faraway objects, making the sky dark. In reality, however, the light falling on the dust would eventually heat it up so that it would glow as brightly as the original sources of the light.

Another proposed answer for the paradox held that the tremendous red shift of distant galaxies–the lengthening of the wavelength of light they emit due to the expansion of the universe–would move light out of the visible range into the invisible infrared. But if this explanation were true, shorter, wavelength ultraviolet light would also be shifted into the visible range–which doesn’t happen.

Despite the fact that blazing stars and galaxies shine throughout the universe, space is pitch black, rather than being brightly lit and this seeming contradiction is known as Olbers’ Paradox.

The ways of life of Upper Palaeolithic people are known through the remains of meals scattered around their hearths, together with many tools and weapons and the debris left over from their making. The people were hunter-gatherers who lived exclusively from what they could ﬁnd in nature without practising either agriculture or herding. They hunted the bigger herbivores, while berries, leaves, roots, wild fruit and mushrooms probably played a major role in their diet. Their hunting was indiscriminate, perhaps because so many animals were about that they did not need to spare pregnant females or the young. In the cave of Enlene, for example, many bones of reindeer and bison foetuses were found. Apparently, upper Palaeolithic people hunted like other predators and killed the weakest prey ﬁrst. They did, however, sometimes concentrate on salmon runs and migrating herds of reindeer. Contrary to popular beliefs about ‘cave men’, Upper Palaeolithic people did not live deep inside caves. They rather chose the foot of cliffs, especially when an overhang provided good shelter. On the plains and in the valleys, they used tents made from hides of the animals they killed. At times, on the great Russian plains, they built huts with huge bones and tusks collected from the skeletons of mammoths.

Men hunted mostly with spears; the bow and arrow was probably not invented until the Magdalenian period that came at the end of the Upper Palaeolithic. Tools and weapons, made out of wood or reindeer antlers, often had ﬂint cutting edges. Flint snappers were skilful and traditions in ﬂint snapping were pursued for thousands of years. This continuity means that they must have been carefully taught how to ﬁnd good ﬂint nodules and how to knap them in order to make knives, burins (chisel-like tools) or scrapers, which could be used for various purposes.

Beginning in 1899, the brothers designed and built a series of gliders to test their various ideas on a flying machine. They constructed a wind tunnel that allowed them to test designs without having to build a full-size model. They even built their own gasoline-powered motor for their aircraft.