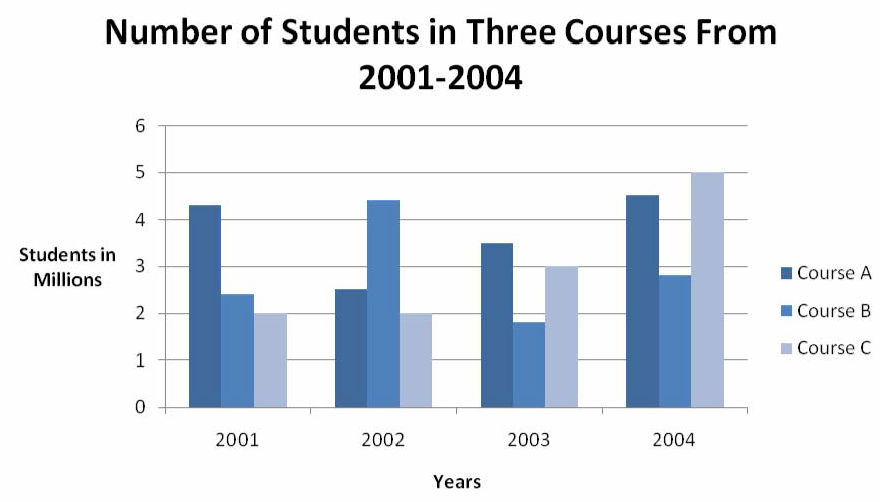 The bar graph shows the number of students in three courses from 2001 to 2004 measured in millions of students. In 2001, for course A, the highest students were registered that more than 4 and declined to approximately 2 in 2002 and further increased to its highest in 2004. In 2002, Course B was famous among students and least famous in the year 2003. Course C started with 2 and increased to 5 million in the year 2004. To conclude, Course C was famous among students throughout a given period which never dropped. 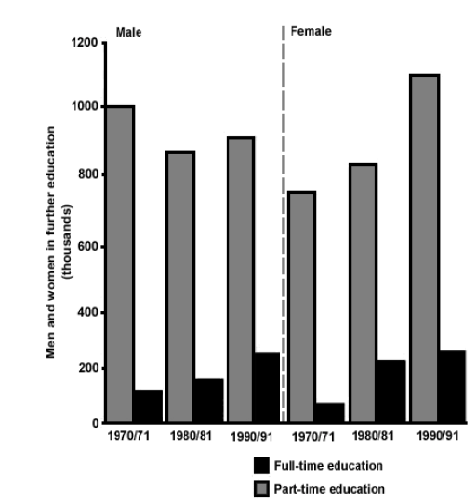 The two bar graphs depict the information about nature of education by both of the genders from 1970 to 1991. In 1970, 1000 males had full-time education degrees which declined to less than 900 males in 1980 and 1991. On the other hand, in 1970, approximately 700 females started full-time education which increased to more than 1000. Part-time education among male and female became famous and it was increasing year by year.

This bar chart compares the estimated oil production capacity among the major Middle Eastern counties in years 1990, 2000, 2005 and 2010. Saudi Arabia was estimated to produce the highest, while Qatar produced the lowest number of oil barrels. Iran, Iraq, Kuwait and UAE produced an almost equal number of oil barrels. In conclusion, Saudi Arabia was the leader in the oil production in the Middle East during the time period provided.

To stay updated for more PTE Academic Describe Image Questions along with Answers, like us on Facebook.