Gender Equality Essay – Women can do everything that men can and they even do it better. They also can do many things that men cannot. But there is a fact that their work is not appreciated as men’s although they have to sacrifice a lot for their family, and career. So someone said: “A woman’s place is in the home. What do you think? Write an essay in around 200 – 300 words. Here is Gender Equality Essay for various exams like PTE and IELTS. Gender equality essay for students of class 1, 2, 3, 4, 5, 6, 7, 8, 9, 10, 11, 12 and college students. 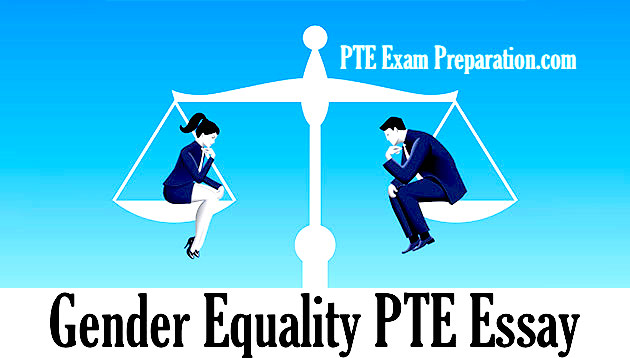 The impact of changes on women’s role in society has been hotly debated in recent times. Some people think that women are better at domestic chores than being involved in social matters, yet I firmly believe that gender equality benefits society in many ways.

Firstly, it is largely considered that workplaces are dominated by males. Although this is not evident for young professionals, female leaders and managers are barely seen when it comes to the higher level of positions. For example, a recent IMF data shows that the number of female CEOs in advanced nations is only 20% of the workplace compared to those of males. Furthermore, the percentage of women involved in the leading level of posts in developing countries are merely seen. This is due to various factors such as religious and cultural issues, ultimately proving fewer opportunities for women who wish to work in society rather than staying at home.

However, there are some advantages which could be brought up in favour of women’s participation in the workplace. Take for example some private companies are now encouraging paternity leave as well as maternity one. This enables male workers to spend more time with their children if their partners were to agree to look after living expenses. Using the system that is proposed recently at workplaces, couples are encouraged to be varied, hence more security and flexibility.

Overall, it is true that males and females have different preferences in terms of physical and mental attitudes, but I think that equal opportunities are imperative and bring advantages significantly to both males and females in the 21st century.