How you will able to get 90 score in your writing section that is Essay, Summarise written text, Summarise spoken text, Write from dictation etcetera. Here are some Common Grammatical Errors in English Writing, which you must avoid for scoring good marks in your PTE, IELTS and TOEFL test. 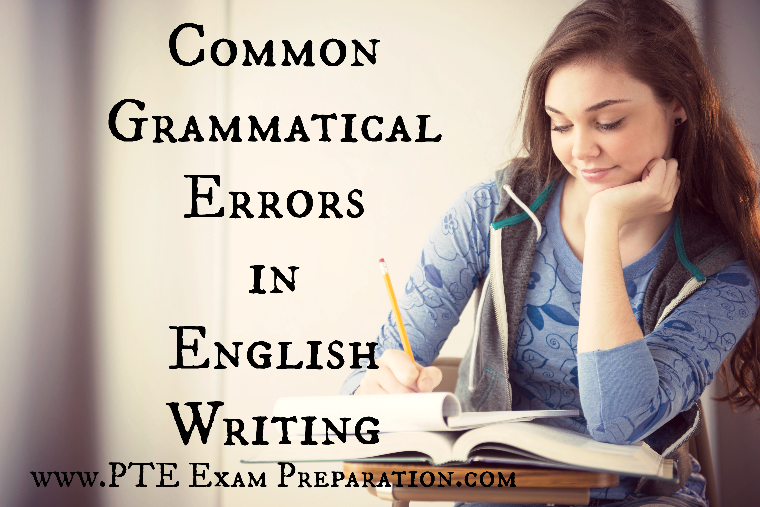 The subject and verb of a sentence must agree with one another in number whether they are singular or plural. If the subject of the sentence is singular, its work must be singular; and if the subject is plural, the verb must also be plural.

Sentence formation are incomplete sentence that doesn’t have one independent clause. Fragment may Leak a subject, a complete verb, or both. Sometimes fragments depend on the proceeding sentence to give its meaning.

A comma should be used after an introduction word, phrase, or clause. This gives the reader a slight pause after introduction element and often can help avoid confusion.

You use an apostrophe with it’s only when the word means it is or it has. Without the apostrophe, it means belonging to it.

5. No Comma in a compound sentence

A Comma separates two or more independent clauses in a compound sentence separated by conjunction. The comma goes after the first clause and before the coordination conjunction that separate the clauses.

Amit played modifier is a word, phrase, or clause that is improperly separated from the word in modifier or describes. Sentence with this error can sound awkward, ridiculous, or confusing. A dangling modifier is a word or phrase that modify the word not clearly stated in the sentence.

Open can replace a noun, and it’s antecedent should be the person, place, or thing to which the pronounce refers. A vague noun reference (including words such as it, that, and which) can leave the reader confused about what or to whom the pronoun refers.

Example:
Incorrect: When a man Finally Found his dog, happy.
(The dog or Jonathan?)
Correct: Aman was so happy when he finally found his dog.

8. Use of the wrong word

There are a variety of words and phrases that are commonly confused and misused in sentence. Using them incorrectly can change the meaning of the sentence or simply reflect carelessness on writers part. There are hundreds of these commonly confused words, so when in doubt, always check the definition and correct spelling of the word.

Run on sentence occurs when you connect two main clauses with no pronunciation.

10. Unnecessary use of Comma

It’s common writing mistakes to throw commas around liberally when they aren’t necessary. There are dozens of example of this error, but here are a few common mistakes.

Faulty parallelism occurs when two or more parts of a sentence are similar in meaning but not parallel (all grammatically similar) in form. It often occurs with paired Constructions and items in a series.

A sentence can become a burden to read when there are too many equally weighted phrases.

A comma splice occurs when two separate sentence are joined with a comma rather than a period or semicolon. Writers often create comma splices when using transitional word, such as however, therefore, moreover, nevertheless, or furthermore.

Example:
Incorrect: My intention was to take her out to dinner, however I decided not to invite her after all.

Correct: My intention was to take her out to dinner; however, I decided not to invite her after all.

A colon is used after a complete sentence to introduce a word, phrase, clause, list, or quotation. The Colon signals that what follows proves or explains the sentence preceding the colon.

Example:
Incorrect: People move to Florida for: The warmer weather, the beach, and theme parks.

Correct: People move to Florida for three reasons: The warm weather, the beach, and the theme parks.

If the sentence sounds awkward by correcting the split, or rule of thumb is to go with what makes the most sense in the context of your writing and for the ease of reading.